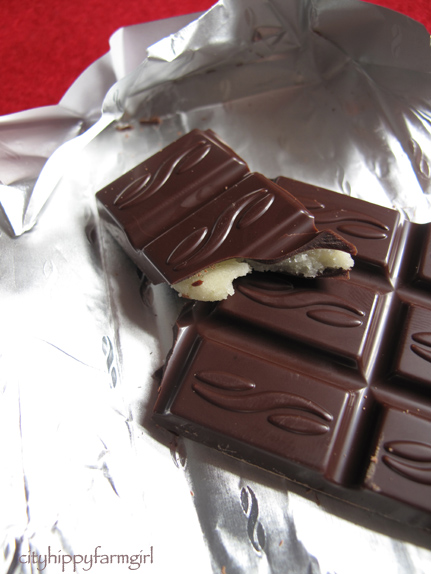 Not particularly assured when seeing a small slug casually amble out of the kitchen sink after washing spinach for dinner and then using it all in the cooking… Did you have a friend oh slug, did you?…did you?

Reassured to find there wasn’t a whole lot of guilt at all about opening up a friends packet of marzipan chocolate she had given me, propping it up on my chest, while laying down to read awhile, before the afternoon rush… Was rather lovely actually.

Feeling far from assured when listening to someone make comments to you that feel less than polite, to smile awkwardly, walk away and wonder how people can be so rude and thoughtless…

Reassured, when Little Monkey rides his much anticipated first horse and then falls off after it bolts when a kid behind it waves a huge stick, has one minute of a cuddle and then gets back on…. Heart. In. Mouth. (Double. Hip. Spica. Cast!)

Not at all assured the first time I cut into a blood orange when I was a teenager. There was obviously something really wrong with it… Thank I goodness I learnt the ways of the blood orange…Happy blood orange season.

Reassured to find that the Goat Curry I had made was a really big pot full and would feed us for several days, and it was delicious…now, if only The Monkeys thought so.

What have you been reassured by lately?

In a large pot add

a good slurp of vegetable oil and your spices

Fry until fragrant for a few minutes and then add your goat meat, (I used 2 shanks, as I didn’t want it particularly meaty). Fry until meat is well coated.

Then add 800mls canned tomatoes, and rinse then can out with another 400mls of water. Then add a large diced eggplant, ( or other vegetables). A small handful of kaffir lime leaves. Cover and simmer for about an hour.

Then add 400mls of coconut milk, season to taste and simmer for a further hour or so. Or until meat comes away from the bone, (or if using regular diced meat, until it becomes soft and tender.)

Serve with basmati rice and a dollop of natural yogurt.