I made a sourdough starter a year ago and have been happily dibble dabbling in sourdough ever since. I love it and my family loves it. It’s easily become a regular part of our life. When I initially started it, I had no idea what I was doing, had confused myself, and so just played around until I got into a rhythm that I liked. The whole process is still very much evolving and I am by no means an expert though. How I do things, constantly gets tweaked and changed and I’m fine with that. There is a LOT to understand with sourdough and bread making in general and I still feel I only have a tiny grasp of it all.

I’m fine with this though. I’m happy to keep fiddling, tweaking and learning. I’ve had a few questions lately of how I started my starter. I partially documented it here, but was never really sure whether it would work properly. It did work though and a year down the track the starter is strong, happy to get reduced to nothing, frozen, bulked up, popped in the fridge, loved on the bench. It’s very much still there.

So could I do it again? Could I make another? Was it a fluke the first time? Were the planets aligned and the sourdough fairies happily hovering when it all happened the first time? Let’s find out. Let me see if I can make another, and this time show a bit more of the process, (as long as it didn’t turn grey, smell like vomit, smell like acetone, grow purple mould, or simply just die.) 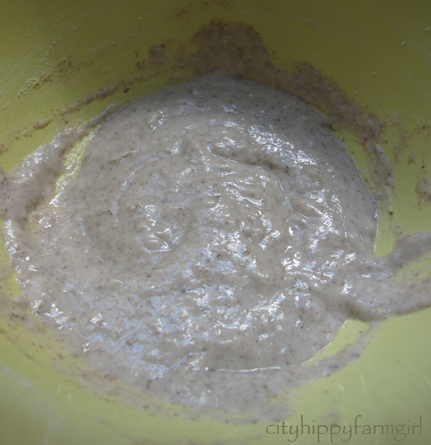 Smells like- Fruity and floury, things are starting… Go on, take another smell to make sure.

Looks like- It’s puffed up a little, it looks a little stringy when you stir through the feed. That tiny black speck in the middle is a bubble. 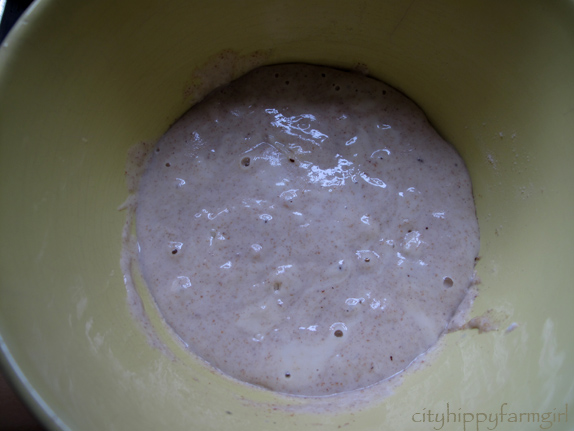 Smells like- a bit fruity, a bit yeasty, a bit…?

Looks like- more bubbles, with a few white streaks with the change of the flour.

Day Five– Fourth feed. First I need to divide the starter, (otherwise it will be too big- this just goes in the compost). Take it back down to 100g of starter and add- 50g white flour and 50mls water. Now weighs 200g. (This is repeating Day Two)

Smells like- A bit fruity, a bit yeasty, nothing unpleasant at all.

Looks like- Bubbles. Lots of action going on now. 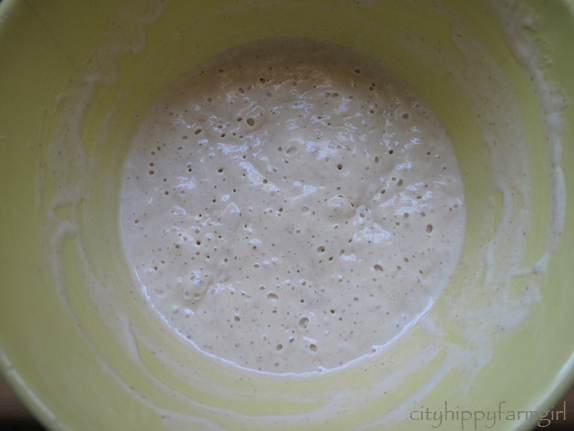 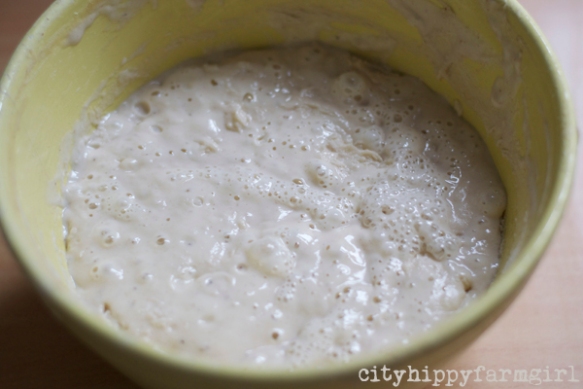 Day Seven–  Changes. The smell of the starter becomes slightly more acidic smelling. As long as there are plenty of bubbles happening, you can decide whether you want to keep feeding it and bake with the discarded amount of starter or store it in the fridge, (this is now your mother.) At this stage your starter is a little vulnerable as it’s still new, but the older and more feeds it has, the stronger it will be.

By storing the mother in the fridge you slow down the fermentation process. (I store mine in the fridge, feeding and baking with it twice a week.)

Before you want to make up a dough, you will need to refresh your starter at least 3 times within 36 hours, (eg. 7am, 7pm, 7am.) Longer, if you have left it for any length of period.

Now as this was just an experiment and I didn’t really need another starter (or to be using up any more flour). I decided to mix up a dough. The bubbles were good and big, and ready to rock.

Into the mixer, with 200g of starter, 375g flour, 250mls water. Quick mix with the dough hook, then forgot about it for 2 hours, (I usually leave it for 40 minutes.) Added 1 tsp salt, mixed again with the dough hooks and then by this stage it’s late and I couldn’t be bothered thinking about anything bread, so whacked a plastic bag over the top of the mixing bowl and popped it in the fridge.

Day Eight– 7am out on to a lightly floured bench, for a quick stretchy, three way fold. Then back into the mixing bowl with bag over the top, and placed in the warmest spot in the flat. Couple of hours later and it’s doubled in size. Back to the lightly floured surface. A stretchy, three way fold again, a little shaping and then on to a paper lined tray with a bag over the top again. Chase the sun once more and forgot about it for half the afternoon. Doubled in size (ish).

slashed and into the oven at 240C with steam. 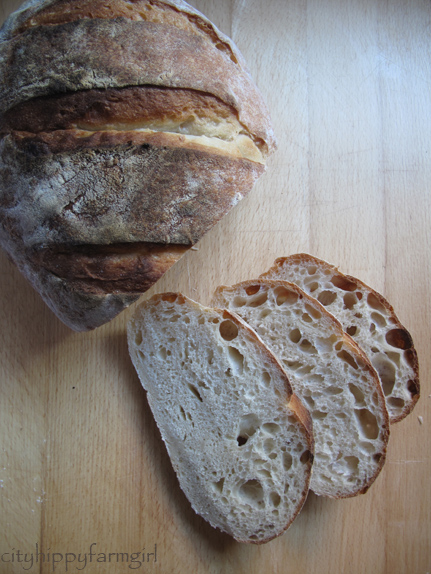 So did it work? Yes, I think it just might have.

If you are interested in getting into sourdough, there is some more information on other methods, troubleshooting, and maintaining the starter below. (There is a LOT of information to take in, but it’s a versatile beast that works in many mysterious ways for a lot of different people.) These people who have shared their vast sourdough knowledge on these sites have been doing it far longer than I have, so please have a read, and happy playing with your new pet.

71 thoughts on “how to make a sourdough starter”