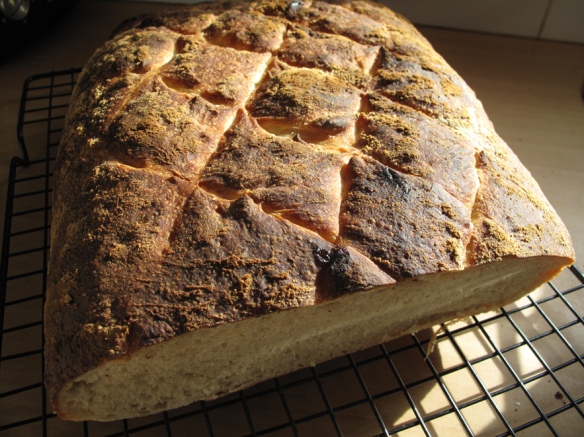 Sourdough tastes good. It tastes reaallly good. Give me a fruity sourdough, with a little butter and I’m a happy woman.

I had toyed with the idea of making a sourdough starter for awhile, but it just seemed too hard. Too time consuming and too confusing as to what I was supposed to be doing. I read and I read, so many different ways to ‘start’ the starter, that my head hurt. All the pages were rolling into one, the words a blur, and nothing was sinking in. I closed my eyes at night thinking of starters and woke again, only to find my first thought of the day was sourdough starter…. Now what do I need to do again? Slash before prove or after? Steam? Oven at the hottest setting or turn it down a tad? Feeds beforehand? Ratio of starter to flour?…..?……?

Enough! Just do it girl. Get cracking.

Yes, there are a number of different ways to do it. Does that mean its complicated or versatile? Lets hope with versatile. I went with the “Bourke Street Bakery Cookbook” method, and for the next 3 weeks diligently fed dear “Suzie” (she had to have a name if she was going to be a permanent fixture in my kitchen) and hoped for the best.

* Now it must be said before I go any further. I’m a hack cook and a hack baker. I look for short cuts, I change recipes, and sometimes it could be said I completely bastardize recipes. Lets put it this way…. I’m not a sifter. Now this can be a downfall at times as the impatient me wants to take over and the delicate french chef in me gets thrown to the back of the kitchen. However, most of the time it works. The food is edible, and The Monkeys go to bed with a full and happy tummy. So for me, hack works… that being said, I wasn’t so sure hack was going to work in doing a sourdough starter.

I decided to do a rye starter. The rye apparently gets going easier and then you can switch over to normal flour, it just gives it a head start,(it’s then just a white starter.) So with rye flour and water in a bowl sitting on top of my fridge, the feeding began. 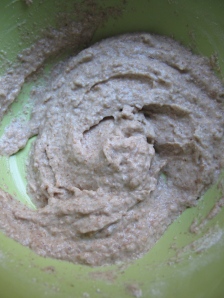 According to the method I was following, the starter wouldn’t be strong enough until after 3 weeks. But in the mean time I did play around with the portions I was supposed to be discarding. 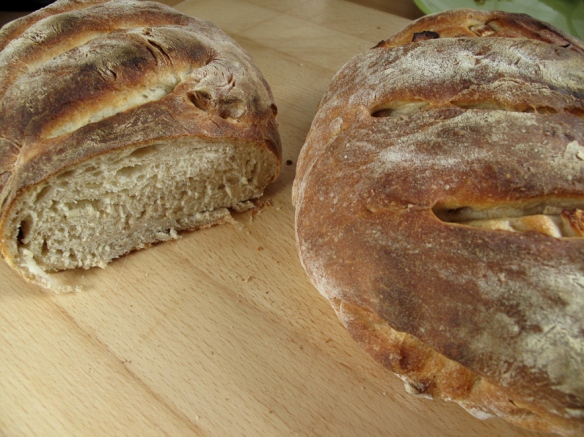 Batch made with 'ferment'- oops

First up, a batch made at day 5. A Light Rye and Apple. Yeast used as a raising agent. Starter used more as ‘ferment’ taste. I have since read that you shouldn’t be using it at all at this stage as the bacteria levels are not right….. oops. I did wonder about this, as at this stage it smelt weird. Not like vomit, as I had read it could smell, just different… vomit didn’t sound so good. 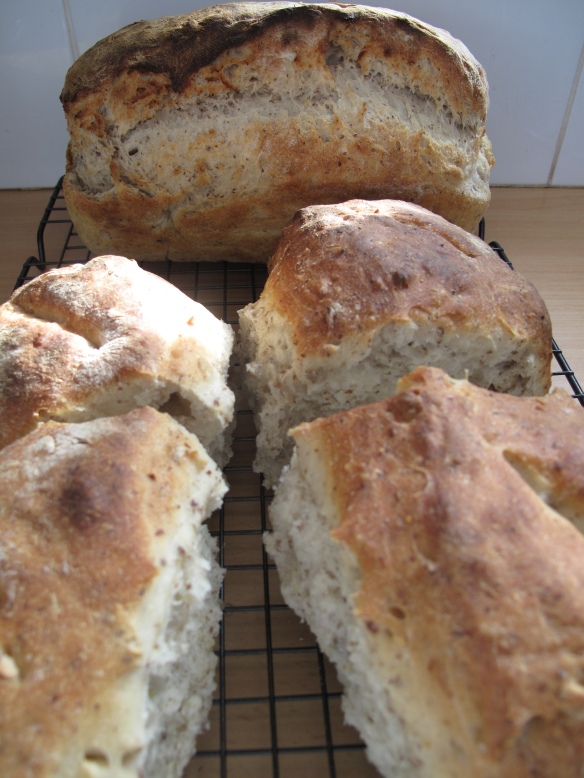 Sunflower and Linseed with a small amount of dried yeast for backup. Fermenting overnight in fridge 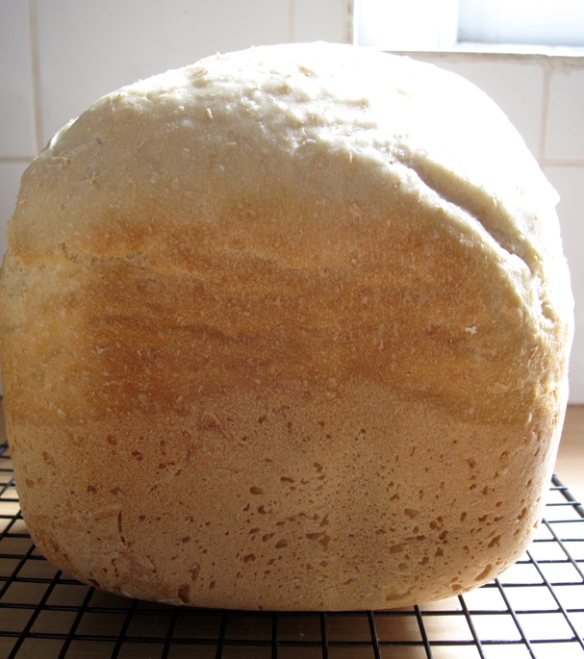 Seeing if it would work in the bread maker. Yep it did. No yeast added and rose beautifully. It did go dry quite quickly though, when used in sandwiches, but fine for toast. I did try and start the bread maker in the morning and then left it sitting for a further few hours to prove before continuing on to cook. It rose beautifully again but then I worked out there wasn’t a just cook button and it had reset itself. So won’t be doing that one again…. dense, (the bread not me…or maybe a little of both.) 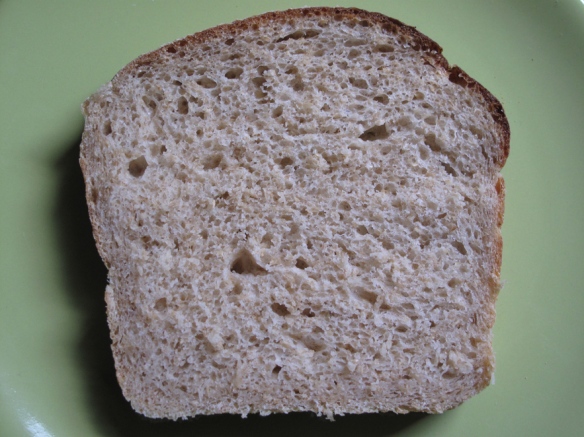 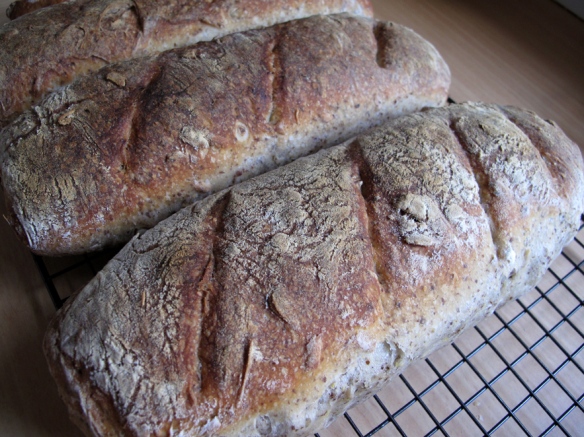 Sunflower and Linseed, one feed 8 hours before mixing ingredients, 2 x 1 hour proving times with a knock back in between, then a slow ferment overnight in the fridge for 10 hours.

I still have to try the Bourke Street Bakery method of feeding the starter 3  times in 24 hours before adding other ingredients, then a long ferment over night. Some people do the extra feeds to build it up and some don’t. It seems there are so many methods in working with natural yeasts, and it’s just a matter of finding what works for me. That being said, if by chance anyone that knows what they are doing reads this and sees something that screams out- No you shouldn’t be doing that! Please let me know. Or just a sourdough tip, and the best methods that work for you.

Overall- I am really happy with the outcomes. I should have done a bread making course so all of this makes a bit more sense, and am hoping to down the track. But until then, I have a starter bubbling away happily, I’m producing edible bread, (actually it’s more than edible it’s really tasty!) I don’t have to rely on commercially made yeasts. I’m saving a bucket of money by not buying shop bread. (For the same price of 2 shop bought sourdoughs, I am getting 12 kilos of flour which in turn makes…. lots more loaves.) Then just playing around with different flavours, etc. like sunflowers, rye, bran, pepitas, apple.

I’m finding it so satisfying to make these breads, it really does feed my soul. I’m truly amazed that they rise and taste good, I just wish I knew more of the how, where, why part of bread making with natural yeasts.

In the mean time though, hack is working.