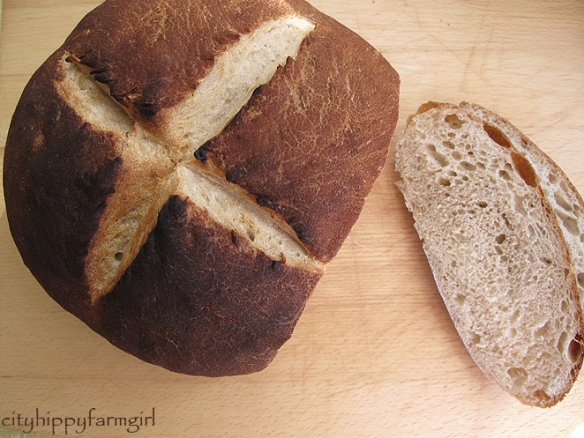 It started off as a dare. Chocolate Peanut Butter Icecream bread. What a hoot that would be.

A dare that made me think, ponder a little…. hmmm, I wonder…

First incarnation. Not so great. Dense, and lacking flavour. Ditch the milk powder, and chestnut flour. Far too dry as well….

More thought time spent on the next incarnation than should rightfully have been done so. An addition of a biga, add a little honey. Longer prove. I wanted a chewier texture, just a hint of the honey and cocoa, and didn’t want to be banged over the head with the sweetness. I wanted a bread, not a cake.

Second incarnation. Much better. More complex flavours, but still… not right. In the mixing it smells wonderful. Subtle in the flavours, not overly sweet, yep, it all sounds right. I have high hopes for the rising dough… and then it just sort of gives up.

Was it simply something that just doesn’t work. The flavours not holding hands together? Was it something I said?

One more crack. If it didn’t work this time, I would lay it to bready rest.

Third go in. It has the lovely combination of vanilla, honey, butter, sugar, peanut butter, cocoa. All flavours that would normally be working so well, (in a cake). The addition of the biga to give it a bit more oomph and…

It still doesn’t work. It’s dry, lacking in flavour, annoyingly slow to prove and does nothing for me what so ever.

Instead I make up a batch of normal sourdough, pop some dark malt flour in it, roll it in some cocoa just before the final prove. Once baked and cut, slap some crunchy peanut butter on it.