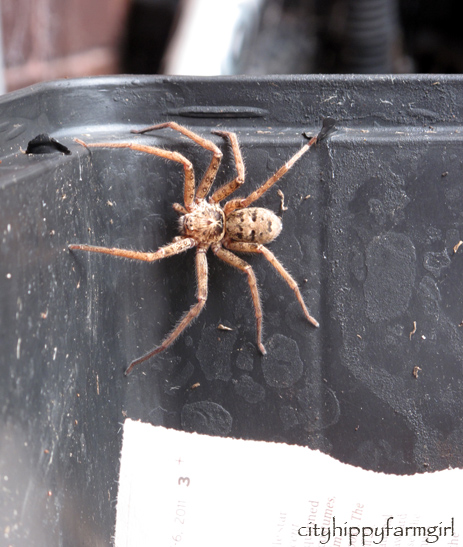 It’s true what they say about Australian spiders. They are bigger and badder than any you may have seen else where in the world. I know, because I live here, and there is one currently residing in my worm farm.  Sure it might not be the biggest I’ve seen, nor the deadliest, (apparently harmless they say….pfft.)

The problem is not so much the spider, it’s the fact that I have gotten a little…city-fied.

I am no longer the person that would happily exclaim, crikey, look at that little beauty and gaze lovingly at my new co-tennanting eight legged friend. That person is no longer, (and some would doubt that person was ever really there.) I am what I am, a city hippy farm girl, and in this instance the city well and truly comes first.

So what to do when I casually slip off the worm farm lid to feed my squidgey friends, and am met with a skittish hairy eight legged freak? 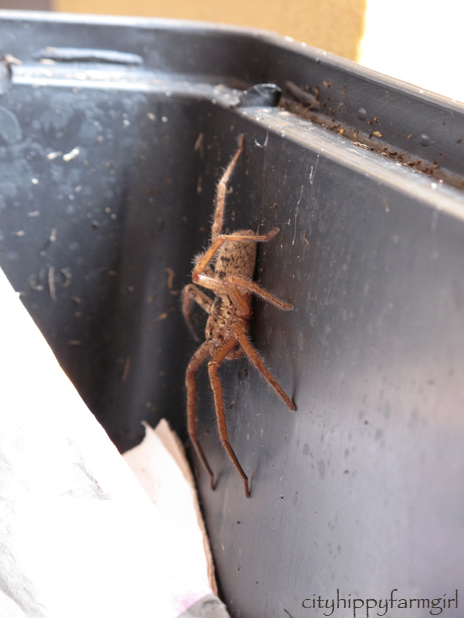 A/ Gaze lovingly on to its ample body, marvelling at its intricate markings and upright leg hair engulfing all of its rather quick legs?

B/ Scream like a crazy person, grabbing the nearest hard implement to me, (probably a wooden spoon) wave it ruthlessly in front of its four eyes before pounding it to spider crumbs while yelling, Diiiiiiie eight legged freak!!!!

C/ Assess the situation. Survey the nearby land. Establish that the kids are inside and don’t need to know. Mr Chocolate won’t be home for another 12 hours, and do I really need to ‘man-up’ and do anything at all?

Let’s quietly put the lid back on and pretend I was never here shall we? The worms weren’t really hungry anyway.

Next day and I had conveniently forgotten about the pit of terror outside my kitchen door. Off to check on my worms and lo and behold… There it is again. I’m sure the little bugger winked at me, while waving four of it’s legs at me in a decidedly jazz hands fashion. Quick inward suck of air and clumsy step back from me and we eye each other off. Ahh, what to do.

I did what any self respecting blogger would do and went and got my camera. Followed by Monkey Boy, who I excitedly showed him the ‘lovely’ spider residing in our worm farm. He was enthralled, gave it some eyeball love “WOW Mama, and then left me with the eight legged freak. You see I’m not silly, I wasn’t passing on any preconceived ideas on how to act around spiders. I waited until he left before I made a small gag noise and all the hairs on my arms stood on end.

Because they run. They run really quickly… and they jump. They are like the crowned Kings of Parcour , and I don’t like it one bit. I can deal with them when I need to, but as Mr Chocolate was home, I didn’t need to. I encouraged him to join me next to the worm farm of terrors and then politely told him he wasn’t coming back inside until he had ‘dealt’ with it.

Do you want me to kill it?

What ever needs to be done babe…

As I quietly bolted the kitchen door behind me, leaving Mr Chocolate waving a flaccid looking roll of newspaper at a bemused looking spider. 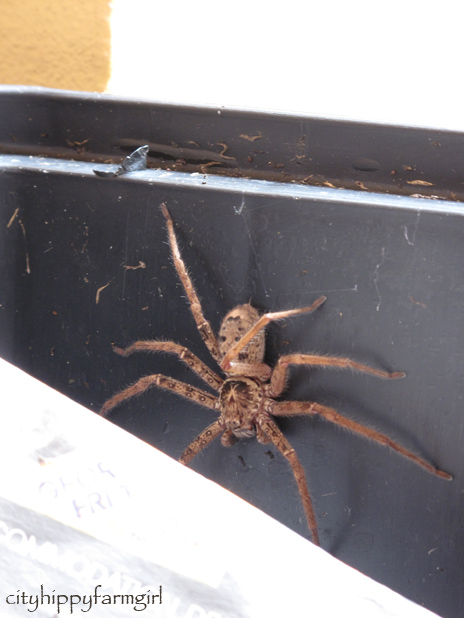 * …and he missed it. The eight legged freak casually parcour-ed off and still remains at large.