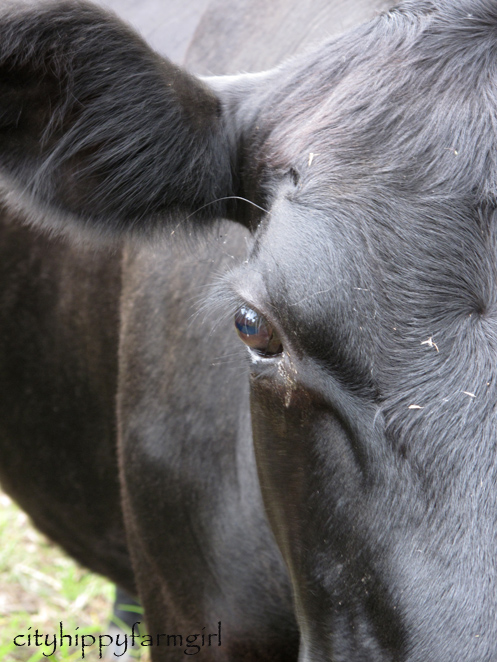 I have meat on my mind. Not the usual thing on my mind and a little less exciting than the next sourdough to construct, but non the less it’s there.

A few things in blogland had prompted the thinking and also just a natural progression I guess of wanting to know where my meal comes from.

This household doesn’t eat a lot of meat. Monkey Boy and Mr Chocolate really enjoy it, but Little Monkey and I can take it or leave it. Free range chicken, organic minced beef, free range ham, and organic sausages seem to be the usual selection of what we choose from. Nothing too exciting there. Over the years, other meaty items just slowly got bumped off. Canned tuna, daily ham on sandwiches, fresh fish…all for various reasons, now don’t usually find themselves on our every day dinner table.

In my little world, the majority of our meat is bought from the supermarket, butcher, or if I’m lucky enough some farmers markets. Ideally what am I looking for? Meat that has been ethically raised, sustainably produced, not compromised on taste, and at a budget that doesn’t hurt the hip pocket. Is that just too hard though on a day to day level for most people?

Many people can’t argue with the convenience of a supermarket. However there is an increase in buying organic, local, free range pieces. If I can manage to get it, I love being able to buy meat either straight from the producer (easier at a farmers market) or at least knowing the area in which it is from and buying through a middle person.

Some of my recent meaty prompter’s…

Pick a pig– Friends put me on this link from the UK. A system that lets you buy your animal, it’s reared by the farmer, slaughtered and then gets delivered to you in the cuts you ask for. A large up front cost, but….you are getting a whole lot of pig there. Also you know where your pork cuts are coming from. I would love to know if there are any people doing something similar in Australia. On a large scale this is a really interesting way of cutting out the middle man. Another similar scheme again in the UK is Yorkshire Meats

Gourmet Farmer– you know I am a fan. What the man has documented on his show is his journey of going from city fella, to small town living. Rearing animals for his own consumption, learning how to kill chickens, and send his heritage breed pigs to the slaughterer.

So whats my beef? (every pun intended.)

Have we become completely desensitized to seeing animals being killed for our plate? I know I don’t feel completely comfortable with it. I would like to think I could do it. Raise an animal, bump it off and then eat it, but could I? I feel if I am willing to eat it, I should be willing to admit that cute little piglet is going to get its head taken off and make some truly delicious ham. It could be a real turning point to vegetarianism for me. However… I would like to think I could rear an animal and either assist in some way in the slaughtering process or do it myself…. Confronting as it most certainly would be.

When you see the meat being sold in the supermarket all wrapped in styrofoam and plastic, all cut up and ready to go. There is usually very little to show you that this pink piece of flesh was once a mooing four legged creature. Feathers still stuck to your chicken pieces? Most people get rather unhappy if this was the case. I remember unloading some groceries from the supermarket in Italy once and there tucked away under the cling wrap and styrofoam was Ms Guinea Fowls head still intact. In my world, I’m not used to that. If I see meat I don’t expect it still to look like the animal it once was. I don’t want any happy memories of a life it once had floating around the room still. But this also seems ridiculous…almost a little precious. It is meat, which means it used to be an animal. Is that as silly as denying a chip in front of me used to be a potato growing in the ground?

Is it merely enough to know what you are eating and where you bought it from? There being no need to kill it yourself, when some one else can do it for you? Will more people begin to choose their meat while thinking of it being sustainably sourced, organically produced, locally harvested and ethically raised. I would like to think so, but feel we have a loooong way to go first. It’s turning around a whole mind set. A whole meat eating culture that needs to be slowly changed.

Should we be taking a moment to acknowledge and honour the life that has been giving up for our plate?

I understand why someone would become a vegetarian for ethical reasons. I also understand why people truly enjoy eating meat. (we still talk about that pork dish at ARIA.) I do think however, that people should know where their dinner came from if at all possible. How many primary schools would teach young children about where their meat comes from? How many parents would talk about it to their young children? How many highschool students would get to study the make up of an animal, different breeds, how to raise them, slaughter, and then cook them? (Agriculture is a chosen subject, in very few highschools.) If this is a part of our every day lifestyle why wouldn’t we be able to learn about it from the beginning.

Incorporate it in to learning how to grow, and harvest vegetables. Surely these are important principles that people seem to be so far removed from these days.

I’m still trying to work out where I stand with it all. It’s not easy. Do you eat meat because it’s there, it’s healthy, it’s what everyone else does? Do you eat all parts of the animal avoiding any wastage? I’m not a fan of any kind of offal, however it does seem rather silly to breed a huge beast for consumption and then only eat half of it.

I would like to think that any meat I ate was treated as humanely as possible in their life beforehand. A chance to live as a young calf, piglet, lamb should, before going ‘down town’. Being mindful of every mouthful of meat that I eat. Being thankful that a life has been given up to feed my families belly’s. Thinking about it where it came from and not taking it for granted that I am here and I need and deserve to eat that eat meat! Happy paddock loving animals look differently to large production ones. Australians are one of the top meat eating countries in the world. A weekend BBQ isn’t usually a success unless there is an array of meaty goodies on offer.

Now I could waffle on and on about this meaty topic and go round and round in circles. For the sake of not boring you all to numbing tears I wont. However I will pass this over for discussion. (Feel free to disagree.)

What do you believe in?

Is buying our meat at the supermarket simply progression? Modern times. We have moved on from backyard butchery. A time now of convenience of food…

Do you consider where you meat comes from when selecting it for the dinner table?…

Do you like having that distance between you and that furry beast/ succulent juicy steak on your plate?

Could you rear and slaughter your own animals for eating if you had access to it. (Either via someone elses farm and livestock, or your own.)

…and would you want to?

* I know that in some wonderful schools the Edible School Yard programme or Kitchen Garden programme is up, running and doing really well. This is still a minority in most schools as far as I am aware though. It is also still dependent on the community to get it up, running and maintaining it.