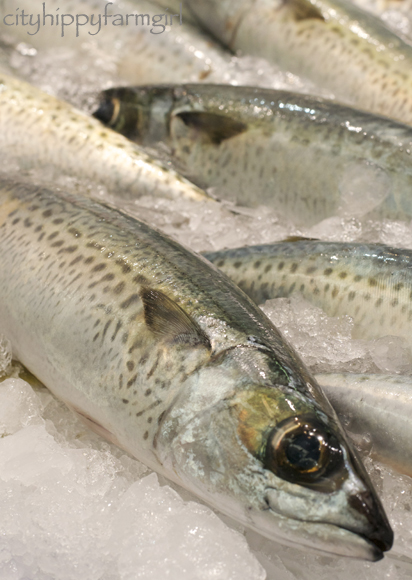 When I was a kid my parents would occasionally buy fish from a co-op shop down by the wharf. The fishing trawlers would bring in their catches and deposit their sea life goodies onto the shop counters. While I wasn’t so fussed on eating the fish I did enjoy playing with the fishy carcass out in the backyard.

Scales would be scraped off, hitting the old newspaper underneath. The dinner parts carefully taken inside to the kitchen and the rest of the fish bits would be all for my sister and and I to inspect.

We would squish its eye a little, have a look in the stomach seeing what it what it might have eaten just before being caught, and generally just dissect the remains to see what there was to see.

While the odd fishy innard silently being flung off onto the grass under foot, and half an hour of playing with fish guts probably made us smell like, well fish guts. I do really value those experiences.

These days our little family doesn’t eat a lot of seafood. Like any meat, I would like to know where and how it arrived on my dinner plate. In an ideal world I would catch any fish that I was to eat myself, or at least meet the person that did. Neither of those options seem particular practical for us at the moment so seafood intake is about once a year.

That once a year time had arrived and there was to be fish on the table. I couldn’t give my kids the same childhood experiences that I had, with cool green grass underfoot, and fish guts to step through… but I could do something similar. 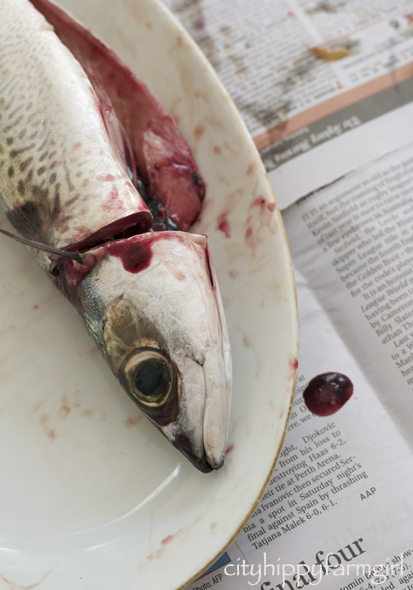 With a sharp knife and eager fingers to prod. Anatomy was scrutinised, fins were stretched out, eyeballs were poked and a satisfying amount of respect was given to the small fish lying on the plate. This was once a life lying before us, respect I think was well deserved.

What was the fish thinking before it got caught mama?

While I’m not a fan of attaching human emotions to animals, I won’t shy my kids away from the realities of eating meat. It doesn’t come naturally filleted and free from eyes and tails. If they choose to eat meat than I have every intention of them knowing where it really comes from.

For me this starts with respecting the fish.

21 thoughts on “respecting the fish”