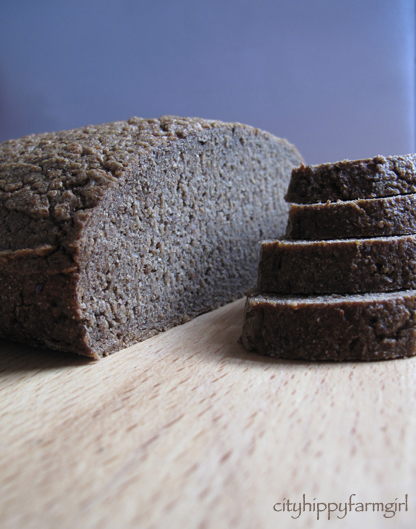 Sourdough is not a quick process. It’s slow, likes to amble. Take its time. Focus it’s energy on the job on hand and then gradually release all of that sourdoughy goodness. Especially slow in winter. I don’t mind though. I’m in no hurry. The bread and I have no place special to be, and if I did…well the bread can wait. Sourdough is like that. Occasionally moody and a little flighty, but regularly reliable, and keen to just make peace with what ever is happening. I like that.

I had started with a 100% rye from Dan Lepard’s The Handmade Loaf. I took my time, didn’t hurry it along. It turned out ok, but I wasn’t thrilled. Mr Chocolate had mistakenly washed up my 2 tablespoons of crucial gelatinized mix to go on top of the loaf, and it all looked a little too floury. I had been nervous about putting the sticky mass dough in my banetton, so had floured a teatowel to line it instead. The loaf just came out looking like a floured teatowel though. Never mind. I’ll try a again.

Second time around and I thought I would tweak the flavours a little. I wanted a more in-depth flavour, and also banished Mr Chocolate from my gelatinized mix at the crucial time. Flavour was better, and I didn’t bother with a banetton, just freeformed a rough round shape and pegged the sides of the baking paper to cradle and support it a little. It did rise, the top looked a little glossy, and several cracks developed while rising…. but it wasn’t quite there yet. What was missing? 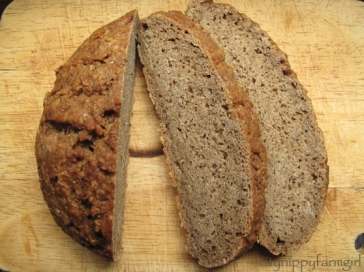 Third time around, and the weather was cold. It certainly was going to take longer than the 5 hours recommended to let it rise. Once baked, I left it for 48 hours wrapped in baking paper before I cut into it. This really did seem to help in the development of the flavour, but….

Trial three- it’s getting there. The flavour was certainly there, but not quite there yet…

Trialing and tweaking I’ve enjoyed doing, but I still find it a bit of a pain to make on account of it being so sticky. The taste is there though. It was really cold the day I made this one and it certainly didn’t double in size. It was a loooong cool prove, probably 12 hours on the bench all up plus 12 hours in the fridge. I’m still sticking with the hand shaping and laying on bakers paper rather than a banetton, I didn’t bother checking the temperature of the boiling water asper Dan Lepard’s instructions, (things aren’t that slow round here.) Just whisked when it’s boiled. I also think wrapping it afterwards is very crucial. The taste is a light sour, really tight crumb and I think the linseed and dark malt flour I added give a bit more depth, to which I like.

It’s filling, it’s good for you, The Monkeys won’t have a bar of it, and that suits me just fine. I can eat my way through it… slowly.

My changed ingredient list is as follows, for the method and some other invaluable notes on Dan Lepard’s more original recipe- jump over to Zeb Bakes. The lovely Joanna made this a little while back and it was really interesting to see what she thought of the same recipe.

adapted from The Handmade Loaf
300g rye starter
75mls cold water
450g gelatinized rye mix
400g rye flour
1 1/2 tsp salt
1 tsp cardamom
1 tsp dark malt flour
50g (1/2 cup) linseed meal, or LSA
gelatinized rye mix- 90g rye flour and 360 mls water
**********
The night before make up the gelatinized rye mix, using just boiled water and whisking flour in immediately. Leave two tablespoons aside for the top of the loaf. Whisk cold water into thr rye starter and then also whisk in the gelatinized mix. Then add remaining ingredients.
On to an oiled surface, try and squish it into the shape you want. Smoothing it round and leave it for 5 (ambitious for me)- 12 hours on a baking paper cradle or banetton. Until it’s risen a bit anyway.
Spread the remaining gelatinized mix on, spray with water and pop in the oven at 210C for about 50 minutes.
******
This post submitted to yeastspotting.
Advertisement

39 thoughts on “slowing it down to eat some rye bread”