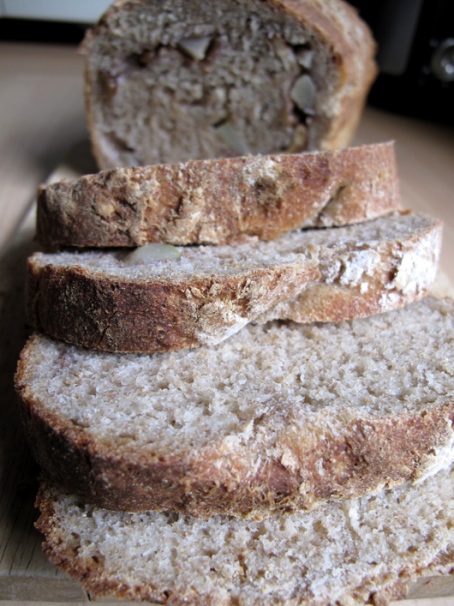 When I was a little kid all I wanted for lunch was a white sliced sandwich in triangles. Ideally with devon, tomato sauce and slapped together with so much butter it would make even a French chef frown. Why did I want that? Because that’s what I didn’t have. That’s what other kids had.

I had the sensible bread with grains or wholemeal, with nutritious things inside. Up until about 9 years old I could potentially have a cheese, chutney and sprouts sandwich. This was my mum’s idea of a delicious sandwich, and perfect for a healthy growing-at- a-cracking-rate young girls lunch. At 9 years old though, enough was enough. My palate wasn’t that developed yet. Not developed enough for chutney and sprouts anyway.  Although I never threw my sandwich out, I did hastily eat it hoping it would just quickly fill me up and no one would see it and say ….ewww whats that? On the odd occasion it may have found itself under my bed…where it may have sat there, next to a book (The Secret Seven) and slowly grow its own penicillin…

Alright that only happened the once, but at 9 years old I decided that I would take over the reins of making my own sandwiches. No more chutney and sprouts thanks. Salami and cheese would be fine. Salami and tomato. Tomato and cheese. They were the three combinations I had pretty much throughout my school career. Until I got to my final year of highschool and I stepped it up a notch and had capsicum and cheese. They were certainly exciting sandwich times.

How things have changed now though. As an adult…phew. Bread and all its loveliness. All the wonderful concoctions you can have for a simple sanga. Since embracing the heady world of sourdough, those concoctions have got even more enticing. This Apple Walnut Rye included…

* So will The Monkeys be having white sliced bread with devon and tomato sauce for their school lunches? Hell no! Do you know what’s in that stuff?!

a shake of cinnamon

Mix up rye dough as usual, when it’s time for the first fold, add apple and nuts. Folding them carefully in. I did an over night ferment, then baked at 250C until top was golden looking. Then popped it out of the tin and baked a further 10 minutes, while turning the oven down to 200C.

The top came out a little messy, but I was happy with the consistency and it just feels so healthy when you eat it. I’m loving this one for breakfast at the moment. And to totally cancel out the health factor, slap some peanut butter on there- so thick you could walk on it…mmmm. 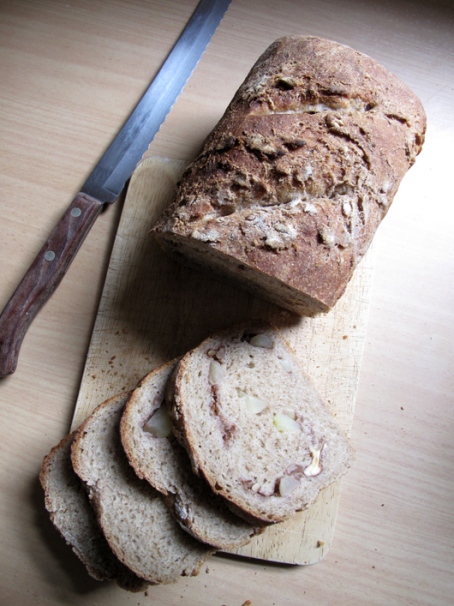 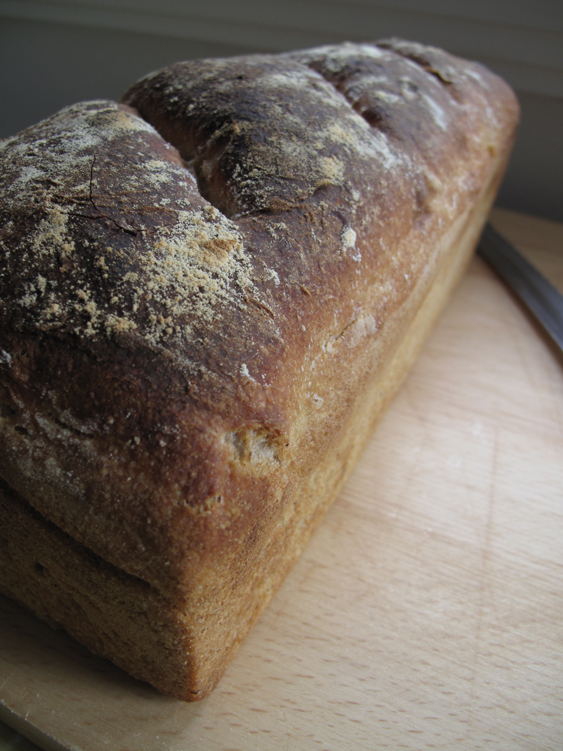 Mix ingredients. Wait for 20 minutes, then add salt and mix again. Let it prove for 1 1/2 hours. First fold. Prove for another 1hour. 2nd fold. In oiled tin, rise for another hour. 11 hour ferment in fridge. Out for 1/2 an hour on the bench. Slash. Then baked at 250C for 20mins top shelf, (steam) then a further 15 mins on the second shelf.