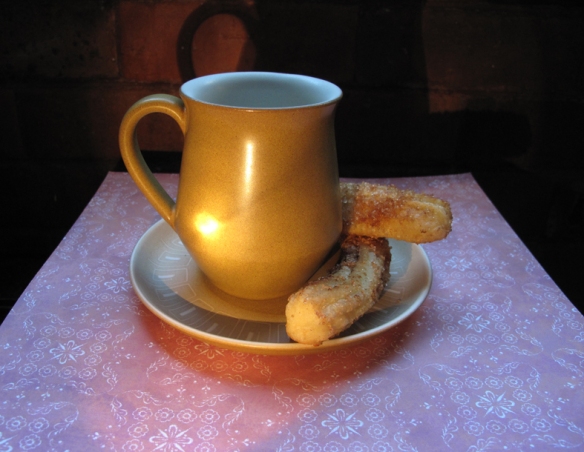 Churros. Pretty much a spanish doughnut, is what it could be compared to. There are so many variations of these in many Spanish-speaking countries. Served for breakfast, street food, or a late night snack. It seems the world loves them.

Usually I would have never made something like this. I’m not a big doughnut fun, and the healthy factor always stopped me from trying to make these before. Its dough fried in oil, rolled in sugar, not for the faint-of-healthy-hearted!

However I had been perusing a Gourmet Traveller magazine and damn it, the photography got to me. It was a Spanish special and no sooner than you could say “Yo no soy marinero soy capitan, soy capitan“, I had a spanish meal plan at the ready.

Much to an amused husband, I declared that I should give these Churros a crack. Although he was a little dubious, was also enthusiastic, as Churros dipped in Hot Chocolate is a happy food memory for him traipsing about Spain in younger days. With a backpack on his back, party shoes on his feet and a churros in hand, Spain was his oyster.

Bring water, salt and oil to the boil in a large saucepan. Stir in flour, beating with a wooden spoon until smooth. Transfer to a piping bag with a fluted nozzle. Heat oil in saucepan, pipe dough into 7cm lengths into oil, cutting with scissors. Cook until golden, drain on absorbant paper. Toss in sugar and cinnamon.

Eat these hot and straight away. They do not keep, as they will be oily little flaccid sticks if you keep them for the next day.

3 thoughts on “Party shoes and churros”