Not particularly pretty cooking, but tasty none the less this month. I’ve been playing with a few new ingredients lately which is always good. Also trying to jazz up a few of the regulars as well. 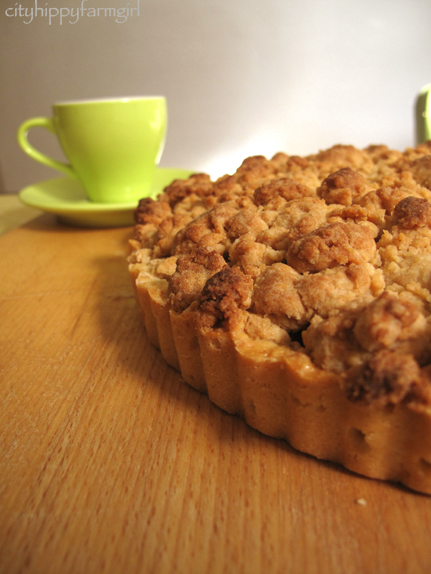 The ever reliable apple crumble with a pastry base to give it a bit of a twinkle. Lemon zest in the pastry, raw sugar and a pinch of coriander cooked in with the apple and a dash of vanilla in with the crumble topping.

Chinese Cabbage is getting a look in. This is a variation of my standard winter salad. Chinese cabbage, pecans or walnuts, apple and what ever else is looking good at the time.

Lemons are plentiful at the moment. Whispering words such as pie…pie…pie to me. It doesn’t matter what kind of pie. As long as it involves lemons and pastry somewhere within. This particular pie had potato flour in it as a thickening agent. Different for me, and I have to say… I quite liked it.

Swiss brown mushrooms, on swiss cheese, on sourdough. My favourite lunch at the moment. Not Mr Chocolate’s favourite lunch, although he does assure me he loves mushrooms. Loves them so much he only wants one or two a month.

I’m not sure it’s quite the same love we have for them.

And my little truffle…

High hopes and grand plans little fella. You live and you learn and all that. Next time, I’ll either buy a bigger one, or use it a lot quicker than which I did. Delicious yes, but I think some of its oomph was lost in between the buying and eating time.

Still tasty though, eaten with some wilted greens, scrambled eggs, sourdough, and a side of Mr Chocolate’s favourite mushrooms. Then again with a little softly cooked egg and shallots. The third egg I cooked was the best, (unfortunately not the one pictured.) The subtlety of the softly cooked egg with the generously grated truffle was quite delicious.

So what else is in season round these parts in the winter months?

What seasonal cooking are you doing at the moment?