There was a birthday fiesta in the air and I had some bread rolls to make and take.

I had been given some cream horn moulds from a friend and along with lots of planned pastry goodies, I also wanted to make some bread rolls. I did a trial run and they seemed to work well. The Monkeys had inhaled them, so I thought they would be good enough to take to the birthday fiesta planned for the weekend.

First up, make some dough. I used the very versatile olive oil bread recipe. When it comes to the shaping stage, divide the dough into even pieces, (approx 1/16 with this amount of dough, with a little left over- I made 17 cone rolls).

Roll them into skinny lengths. Making sure all the bubbles are out. Roll them on an unfloured surface, you want a bit of stick to be able to roll properly.

Once they are rolled them dust them with a little flour, you want them to keep the rolled shape, when proving.

Lightly oil your cone moulds and then roll the dough along the mould. I found it was easier to keep on the bench rather than holding it up and winding it round.

Plain ones are easy or using a little oil and then a light dusting of poppy seeds. 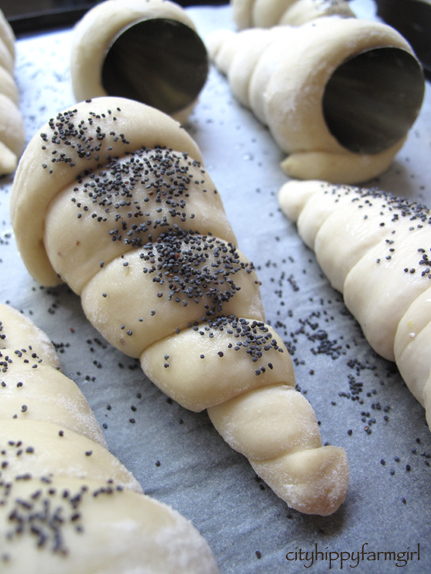 Bake in oven at 240C with steam, for approximately 15 minutes. Oven time is going to vary, I would start watching them like a hawk from the ten minute mark.

Stuff them full of anything that takes your fancy.

We had these with beans, chicken, guacamole and sour cream, (or as The Monkeys and their Monkey Cousins did, stuff a sausage in there so as not to cut in on any essential play time.

Tips * When winding them up, don’t let the dough go over the lip of the cone mould, the bread will bake over and be difficult to get out. When taking the mould out, do it while the bread is still warm.

This post submitted to the wonderful holiday version of yeastspotting.