Thankfully Little Monkey is still young enough to want to wear most things I put him in. I’m sure if I strapped a pancake to his head, secured it with a ribbon and it kept out the sun, he would still wear it.

Pancakes aside, but with this philosophy in mind, I started crocheting my first hat.

I had the wool, I had the hook, and I had the image of a lovely warm colourful number. A hat to keep small ears warm, with the little imp running around and looking  rather dashing in his new hat at the same time.

Now I just had to harness that imagery and put it into practise. Crochet and I were new friends, quite new friends. I was still practising and wasn’t quite sure how to make a hat rather than a… well, a pancake.

Reclaimed wool from my mum, who in turn had reclaimed it from someone else. Stolen moments at the playground after school to crochet, and a week and a half later Little Monkey can now wear his new pancake… I mean hat. 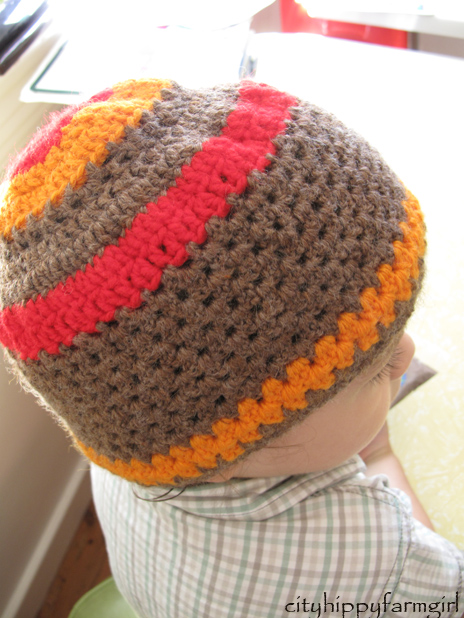