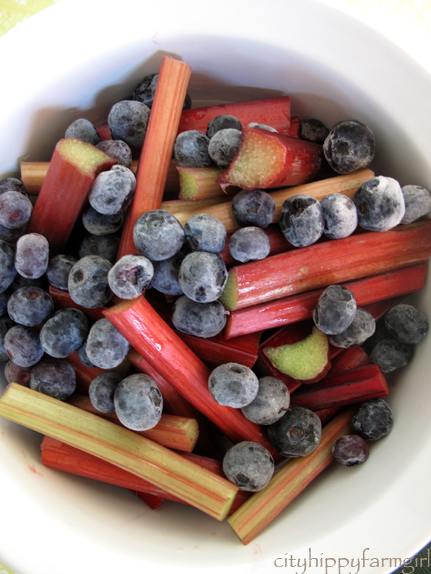 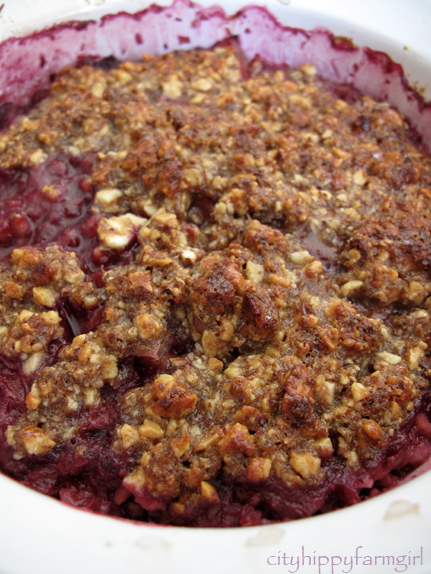 I didn’t feel like sugar and I didn’t feel like flour… but I did feel like dessert. The rhubarb was fast becoming friends with the flacid celery in the fridge and I still had some squirrelled away blueberries in the freezer. A crumbley thing it was. Lots of similar variations of this had been popping up around the blogosphere. It’s funny how a food dish can sneak it’s way in, and suddenly everyone is happily eating a variation of the same thing.

So did rhubarb without sugar work?

It probably didn’t work as well as it could have. However, the honey was a decent trade off and completely passable if you were going easy on the sugar and didn’t want any gluten though. The Monkeys had two serves of this, so it certainly passed their palate test. Mr Chocolate got through it and declared yes it was good… but the last one was better, (with sugar and flour.)

Bunch of chopped rhubarb and a punnet of frozen blueberries

in the microwave for 3 minutes

mix it round and pop on the top of the fruit

into the oven at 180C until golden